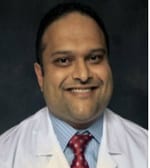 Originally from New York, Dr. Singh attended New York University, College of Arts & Science where he received his Bachelor of Arts with a major in Economics. He continued at New York University School of Medicine and received his Medical Doctor degree in 2009 with honors in Vascular Biology research.  During medical school, he helped found and run the Laboratory of Bioregenerative Medicine & Surgery (Cornell Medical College) where he investigated novel therapies to reduce the damage to organs during events that deprive the body of vital oxygen (such as heart attacks and strokes). He also helped develop a vascular (blood vessel) matrix that could be the first step in the growth of viable organ replacements.

Dr. Singh has authored and co-authored more than 60 peer reviewed publications and abstracts.  He presented his research at several national and international medical society meetings.

Have you seen this provider?
Be the first to leave a review.
How was your visit with Dr.Singh?
(Select a rating)

Please verify insurance information directly with your doctor’s office as it may change frequently.