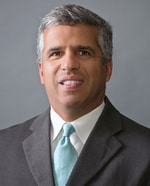 Dr. Igor DeCastro specializes in minimally invasive and microsurgical techniques for brain and spinal cord conditions and tumors. He completed neurosurgical residency programs in both his home country of Brazil and also in the United States at the University of Arkansas for Medical Sciences (UAMS). In 1999, he was selected to participate as a research fellow in Microneurosurgery at UAMS under world-renowned neurosurgeons Gazi Yasargil, MD, and Ossama Al-Mefty, MD. During that year, Dr. DeCastro assisted Professor Yasargil in writing a special Neurosurgery paper entitled “Legacy of Microneurosurgery: Memoirs, Lessons, and Akionas” which was published in a special edition, “Men of the Century: 1950-2000.”Upon completion, Dr. DeCastro returned to Brazil to practice at the Air Force Hospital in Rio de Janeiro. There he collaborated on several papers with José Alberto Landeiro, MD, the President of the Brazilian Neurosurgical Society. Dr. DeCastro also assisted in the creation of the Microsurgical Laboratory in the Air Force Hospital. While there, he was invited to teach a Microsurgical Anatomy of the Brain course at the prestigious Cranio-Cervical Junction workshop coordinated by Professor Evandro de Oliveira, MD for the purposes of training residents from all over the world.Dr. DeCastro moved to the United States in 2004 to complete another neurosurgical residency at UAMS. During his training he had the opportunity to work under GNI’s Dr. Richard Rowe on complex spine procedures. During his second residency, Dr. DeCastro was honored as the “Resident of the Year” three times and he became the first Resident to receive the “Chris Hackler Ethics Award.” Additionally, Dr. DeCastro obtained the highest score on the Neurosurgical Boards for the last 15 years among UAMS graduates.Dr. DeCastro entered private practice in Hot Springs, AR, in 2010 where he also served as a member and Chief of Staff of St. Vincent Hospital’s Medical Executive Committee. Dr. DeCastro has always had a goal of joining a larger practice with an emphasis on academics and research. He will serve as an Associate Professor of Neurosurgey at Mercer University.
View more
FEATURED PROVIDERS NEAR YOU
Featured Results
Featured Results

Preferred Provider badge recognizes providers that are committed to transparency, responsiveness and great service to patients, and have earned a high patient satisfaction rating.
Click for our Methodology

Dr. De Castro's Rating
18 Reviews
Patient Perspective
5.0 Explains conditions and treatments
5.0 Takes time to answer my questions
4.5 Provides follow-up as needed
Office Rating
Showing ratings for:
840 Pine St Ste 880, MacOn, GA, 31201
n/a Average office wait time
5.0Office cleanliness
5.0 Courteous staff
5.0 Scheduling flexibility
840 Pine St Ste 880
MacOn, GA, 31201
18 REVIEWS
Showing 1-10 of 18 reviews
"Excellent service"
"Excellent service and care from start to finish "
"Dr. Castro is a great doctor. I am so glad my friends recommended him to me. The staff is very nice and I enjoyed meeting them. Thank you for seeing me today. Linda Harden"
"The wait was short, his staff is very efficient and has compassion for the patients . The up front staff is fast and courteous checking in and out but the doctor…. He is SUPERB, EXCELLENT, COMPETENT, COMMITTED to helping you feel better, untouchable knowledge and Amazing bedside manner!! "
"Dr DeCastro sets the standard for medical professionals. He and his staff are thorough and caring. I totally trust them with my medical needs. "
"Dr.De Castro is great! I absolutely love him! "
"Dr DeCastro is an amazing doctor! He done a Chiari malformation decompression surgery on me in March. He was so caring and his staff is also. Today I had a check up and was sick while I was there. One of the ladies called me about 2 hours after I left just to check on me and make sure I was feeling better. I highly recommend him and his staff!"
"Busy and friendly. He came in the room, told me it was not a fabrication, that we were going to try injections and see how that works. I have no complaints."
"What a great group of professionals all the way around! Everyone I dealt with before and after my surgery were very professional and courteous. Dr. De Castro is extremely knowledgeable, caring and professional. He took the time to answer all my questions and listen to my concerns. Thank you for taking such good care of me!!"
"All my visits before and after my surgery was very professional and friendly. I was treated with respect from him and his staff. Thank you!!"
View more

Please verify insurance information directly with your doctor's office as it may change frequently.
View more