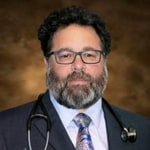 During TMS treatment, magnetic pulses are sent to your brain, stimulating neural activity and resulting in long-term symptom relief and improved quality of life.

Studies published in recent years have shown a significant reduction of depressive symptoms in patients receiving TMS treatment. At time of TMS treatment completion, over 40% of patients experienced NO depression symptoms.

In addition to its effectiveness,TMS treatment for depression has few side effects, and none of the negative side effects that accompany antidepressants or shock therapy (ECT).

Howard Chaitoff came to Alaska in 1987 and served as a medical service specialist at Eielson AFB. He pursued a Bachelors of Science degree from University of Alaska, graduating in 1995. After serving as Adjunct faculty for the UAA Biological Sciences department, he was awarded a Wellcome pharmaceutical grant and studied clinical cytogenetics at the Salisbury Genetics Laboratory in England. His abstract on complex chromosome arrangements was presented at the British Human Genetics Conference in 1998 and later published. From there he earned a postgraduate certiﬁcate in Science Education from Southampton University and taught genetics at a sixth form college and general sciences in British public schools. Returning to Alaska in 1999, Mr. Chaitoff taught at schools for at-risk teenagers, and in native and gifted student programs within the Anchorage School District. In 2008 he combined his military medical experience with science and teaching and graduated from the University of Washington, MEDEX physician assistant program with honors.

Mr. Chaitoff served as the Primary Care Manager for the Wounded Warriors on Ft. Richardson, specializing in PTSD, Traumatic Brain Injury and chronic pain. In addition, Mr. Chaitoff has practiced in the ﬁelds of primary care medicine, psychiatry, interventional pain medicine and general surgery. In his spare time, Mr. Chaitoff provides primary and emergency care for inmates incarcerated in Anchorage prisons. Mr. Chaitoff welcomes the opportunity to provide psychiatric care for his patients at TMS Center of Alaska with offices in Anchorage and Wasilla.

Please verify insurance information directly with your doctor’s office as it may change frequently.
View all