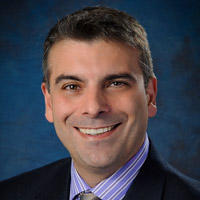 Claim your profile
Gastroenterologist
21
Leave a review
Indianapolis, IN

Dr. Ciaccia is a native of Chicago and received his bachelor's degree from Loyola University in 1985, after which he moved to Wisconsin. He received his medical degree from The Medical College of Wisconsin in 1989. After medical school, he completed his internship and residency in internal medicine and fellowship in gastroenterology at Duke University Medical Center in Durham, North Carolina from 1989 to 1995. He was on staff at Duke University Hospital from 1995 to 1997 before joining the clinical faculty at Indiana University Medical Center where he practiced from 1997 to 2001. Dr. Ciaccia joined Gastroenterology Associates (now Community Gastroenterology Care) in 2001 and continues to be on the part-time faculty at Indiana University Medical Center. His practice is based at the Community Hospital North office. He is board certified in internal medicine and gastroenterology.
View more
FEATURED PROVIDERS NEAR YOU
Featured Results
Featured Results